On behalf of the Board of Directors, I present the Annual Report of Mycron Steel Berhad and its group of companies ("the Group" or "Mycron") for the financial year ended 30 June 2019 ("FY2019").

Mycron Steel Berhad encompasses the combined operations of two subsidiaries, namely Mycron Steel CRC Sdn Bhd ("MCRC") and Melewar Steel Tube Sdn Bhd ("MST"). MCRC is involved in the mid-stream sector of the steel industry, in the manufacture of Cold Rolled Coil ("CRC") steel sheets, while MST is involved in the down-stream sector, in the manufacture of Steel Tubes and Pipes ("Steel Tube"). 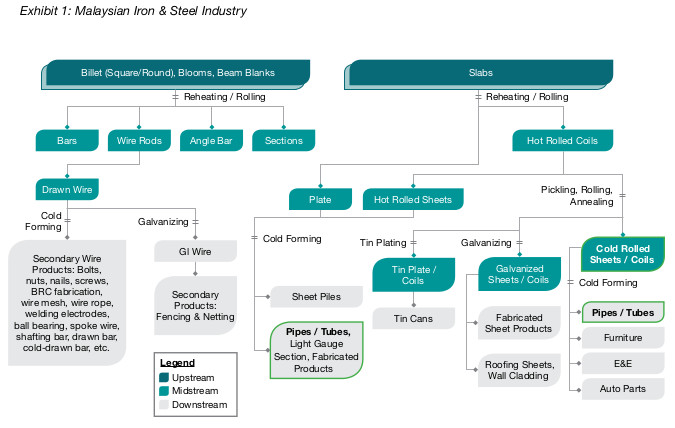 Both subsidiaries were affected by low revenue. The CRC Division, recorded revenue of RM 463 million as compared to RM 547 million the previous year, representing a decrease of 15.4%. The Steel Tube Division registered revenue of RM 260 million from the preceding year's RM 274 million, a decline of 5.1%.

In terms of tonnage, CRC sales decreased by 16.2% to 154,583 tonnes, compared to 184,437 tonnes in the preceding year. CRC sales tonnage include secondary products and services, like second grade CRC, pickled and oiled, and scrap.

Steel Tube sales decreased by 7.1% to 84,399 tonnes, compared to 90,823 tonnes in the preceding year. Sales tonnage for Steel Tube include other secondary products and services, such as second grade pipes, slitted edge, hot dipping, pipe-forming and pipe slitting services, and scrap.

FY2019 was a challenging year for Mycron. In view of the Group's financial position, the Board of Directors do not recommend the payment of any dividend, for the financial year ended 30 June 2019.

For FY2019, the CRC Division achieved sales revenue of RM 463 million, which was RM 84 million lower than the preceding year. The decline is mainly attributable to unfair competition caused by diversion of cheap international CRC, into vulnerable and exposed markets such as Malaysia, due to the rise in trade protectionism in the West. The constant dumping of CRC, into the domestic steel industry, throughout FY2019, has significantly impaired and injured domestic CRC manufacturers, resulting in lower margins, and lower sales volume.

The CRC segment registered a pre-tax loss of RM 16.5 million for the year.

CRC's revenue for the first quarter ("Q1") was lower than the preceding quarter, with sales tonnage dipping by 11%. As a result, the segment registered a pre-tax loss of RM 2.85 million for the quarter.

These negative margin spreads (i.e. where the price of CRC finished goods, is actually cheaper, than the cost of its core HRC raw material) are caused by direct subsidies (disguised as tax rebates), by as much as 16%, given by the China governments, for exported Chinese CRC. These subsidised Chinese CRC enter Vietnam, and are physically swapped with Vietnamese made CRC, which are exported to Malaysia. The physical CRC entering Malaysia, may not be Chinese made, but the Chinese subsidies, is allowing Vietnamese CRC, to be shipped to Malaysia, at subsidised prices.

Because of this "Subsidy Pass Through" practice, the US had imposed a punitive 400% duty on Vietnamese steel earlier this year. The "Subsidy Pass Through" is obvious, and the proactive US government has acted swiftly. Malaysia however, still maintains a tiny 2% duty on Vietnamese steel entering Malaysia, despite repeated call-toaction by the industry. Nevertheless, Mycron is confident that the nation's policies, will eventually be in-tune with that of the industry, and that there is hope for the future of steel in Malaysia.

The third quarter ("Q3") was similar to Q2, as escalation of the trade war between China and the US, continue to disrupt global commodity markets. The seasonal Chinese New Year holidays, during Q3 resulted in the CRC Division, posting lower revenue, lower sales tonnage, and pre-tax losses of RM 6.46 million for the quarter.

In the fourth quarter ("Q4"), sales tonnage dropped by a further 8.1% to 33,839 tonnes, whilst sales revenue dropped by 10.2% to 97.8 million. However, the segment achieved higher spread and margins for the quarter, which resulted in an improvement over the previous quarter, reducing the pre-tax loss to RM 1.1 million.

The Steel Tube Division’s revenue decreased by 5.3% to RM 260 million for FY2019, due to slowing demand for steel pipes, caused by the soft domestic economy, halted mega projects, and the significant slowdown in the construction sector. The rising cost of Steel Tube's key raw material (i.e. HRC) during the second half of FY2019, due to the spike in iron ore prices, as a result of the Vale Tailings Dam Disaster, put further pressure on margins.

The tube segment registered a lower pre-tax profit of RM 7.24 million for FY2019 compared to the preceding year.

For Q2, the Steel Tube division recorded a significant drop in sales tonnage, revenue, and profits. Sentiment in the pipe and tube sector has been fragile, since the Malaysian General Election, as domestic steel demand and consumption significantly weakened, due to withheld government project payments. This non-payment to project contractors caused strain to the entire steel value chain, as contractors defaulted on payments, due to steel stockists and suppliers. When the steel stockists’ cash flows are affected, they naturally hold back placing consistent orders for Steel Tubes.

The Steel Tube segment registered a sluggish Q3 with decline in sales tonnage, revenue, and profits. The weaker performance was due to margin squeeze, as a result of rising cost of input materials, which were affected by the Vale Dam Disaster's effect on Iron Ore prices. At the same time, the annual Chinese New Year celebrations during the month of January and February, resulted in shorter working periods during the quarter.

The fourth quarter (Q4) results, showed slight improvement with sales revenue increasing marginally by 8.7% to RM 61.5 million compared to RM 56.6 million in the previous quarter. Q4 also recorded a higher sales tonnage and pre-tax profit of RM 0.98 million. However, sales did not increase substantially due to weak demand and the Hari Raya festive season in June.

During the financial year under review, the global and domestic steel industry environment proved to be extremely challenging, on the back of significant global and domestic economic headwinds, caused by the escalation of the trade war, between the two largest economies in the world.

Steel, a business which is sensitive to changing winds of economic growth, has been battered by weaker demand, rising costs of iron ore, and an oversupply of cheap subsidised Chinese steel.

The 25% steel tariff imposed by the US, which was subsequently followed by Europe’s 25% steel tariff, have split the Western market, from the rest of the world, leaving Asia to face the glut of cheap subsidised Chinese made steel.

The Group's CRC subsidiary suffered losses, due to this trade diversion, of cheap CRC, which is dumped into the vulnerable Malaysian market. Malaysian CRC manufacturers have had to endure unfair competition, from subsidised foreign CRC producers.

The Group's Steel Tubes and Pipes subsidiary saw decline in sales tonnage, revenue, and profits for the year. Overall steel demand in Malaysia has been stifled by halted mega projects, and a significant slowdown in the property and construction sector.

Scrap Based CRC is considered to be inferior in metallurgical quality, as it contains impurities derived from the scrap used to manufacture the Scrap Based HRC. Being manufactured from lower quality HRC, Scrap Based CRC is used by downstream customers, mainly in the Steel Tube and Furniture sectors, which do not require high quality CRC.

Not long ago, all HRC and CRC Steel Manufacturers in Malaysia were Malaysian owned. However, as the years passed, one after another were either shut down, or taken over by foreign owned steel mills, the latest being YKGI Holdings Berhad’s disposal of its plant and factory to NS Bluescope Sdn Bhd in 2019, due to sustained losses caused by years of battling cheap imported flat steel products. The last decade has truly been a harsh and hostile environment for Malaysian Steel mills, with rising domestic cost of electricity, natural gas and minimum wage, whilst grappling with the turmoil caused by surging steel imports that manipulate Free Trade Agreements ("FTA") and World Trade Organization ("WTO") laws.

Mycron is one of the last fully operational Malaysian owned and managed flat steel mill in the country. In 2019, the Group’s pipe subsidiary, Melewar Steel Tube ("MST") celebrated its 50th Anniversary and Mycron Steel CRC ("MCRC"), celebrated its 30th Anniversary. Mycron is proud to be part of the journey of the country's goal of achieving a fully developed nation status. The Government, albeit slowly, has recognised the contribution of the Malaysian Steel Industry, and is working towards safeguarding local steel mills, such as Mycron, against unfair trade. Mycron is working closely with the Government to ensure sustainability of the local steel industry.

Exhibit 6 provides details of utilisation rates and total capacity for the domestic CRC industry. Over the past four years, Malaysian domestic CRC producers have been facing substantial under-utilisation of production capacity, at 56%, principally due to substantial CRC imports.

Domestic CRC production has dropped by 21% from 742,000 tonnes in 2015, to 589,210 tonnes in 2018, while CRC imports as a percentage of CRC consumption, stands at 67%. The ratio of imported to domestically produced CRC is 2:1, which is preposterous for any country that have domestic steel CRC producers. 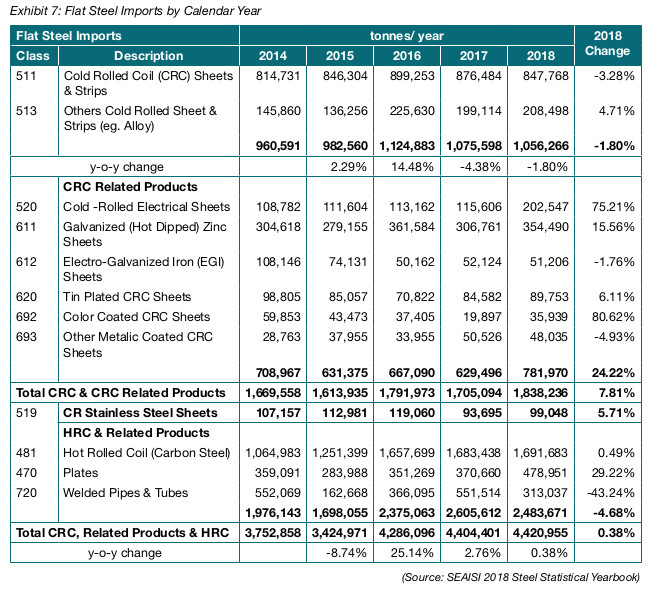 Exhibit 7 shows the summary of imports of flat steel into Malaysia. Imports of Cold Rolled Coil ("CRC") sheets and strips are 1,056,266 tonnes, while the combined imports of CRC and CRC Related Products are at an astounding 1,838,236 tonnes, the bulk of which could have been manufactured locally. 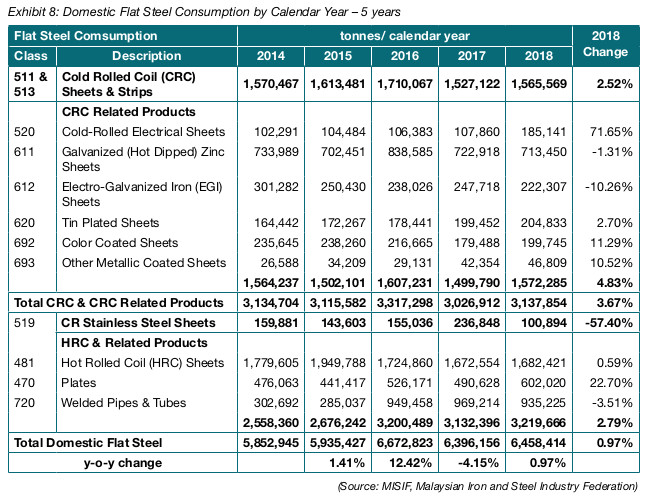 The domestic consumption of HRC increased marginally by 0.59% to 1.68 million tonnes.

The consumption of Welded Pipes & Tubes on the other hand decreased by 3.51% to 0.94 million tonnes. The decrease is attributable to slow market demand in the pipe sector due to mega projects being put on hold and significant slowdown in the property and construction sector.

The domestic CRC manufacturing industry is confident in the execution of the Prime Minister's announced "Buy Malaysian" policy. Only through such a policy will capacity utilisation increase, which will directly lower manufacturing cost, create more local jobs, and will earn more tax revenue for the government, for it to support further economic growth. 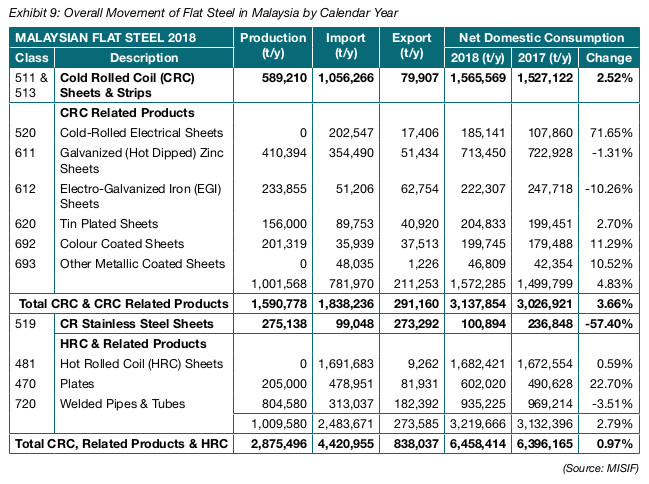 Exhibit 9 provides a summary of the overall movement of flat steel in Malaysia for the calendar year 2018.

Once the government agencies move away from their "Open Market Liberal Free Trade" stance, and comply with the Government's "Buy Malaysia" policy, the survival of the domestic CRC industry will be assured. The world has moved to a "Protectionist" stance two years ago. It is about time that the Malaysian authorities change their tone, to be in tune with the world.

In respect of Welded Pipes and Tubes, 313,037 tonnes was imported with 182,392 tonnes being exported, reflecting the movement of mostly Oil and Gas standard Steel Tubes. Production of domestically manufactured Steel Tubes was 804,580, which represents 86.0% of domestic consumption of 935,225 tonnes.

Hot Rolled Coil ("HRC") is the key raw material used by the Group, for both its CRC and Steel Tube business segments.

With no domestic HRC manufacturer in operation, the Group has been importing all its HRC needs from Japan. International HRC prices declined from August 2018, reaching its lowest point of USD 476 per tonne in December 2018, before gradually increasing from the start of January 2019 (refer to Exhibit 10). 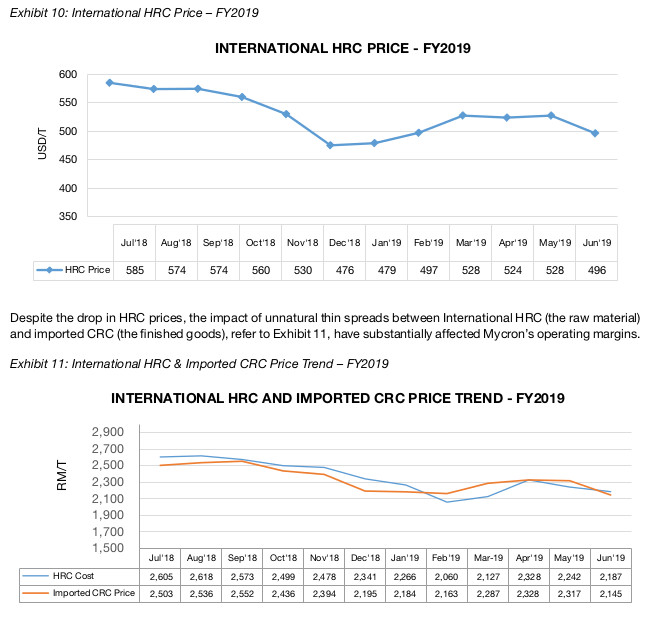 Apart from HRC, which is the core raw material for the manufacture of CRC and Steel Tube, the industry is also a large consumer of electricity for its rolling plants, and natural gas, which is used to anneal CRC. In the past decade, Malaysian domestic CRC producers, have experienced substantial price hikes in these two inputs, which have contributed to significant margin squeeze. 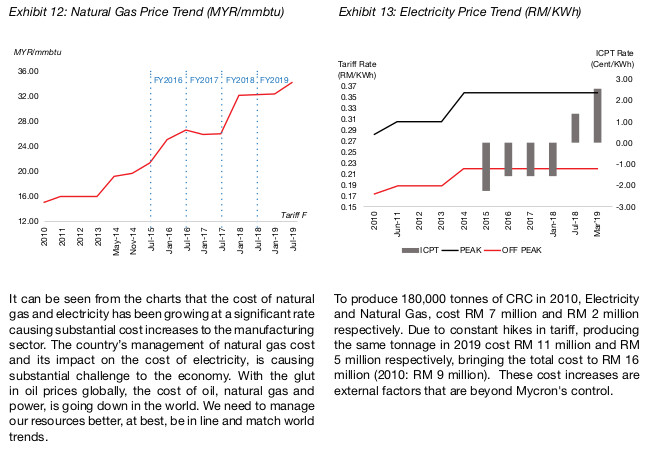 As Mycron enters the 4th Industrial Revolution, both Steel Tube and CRC operations are paving way to digitally transform their operations and adopt a "Lean Manufacturing" philosophy.

MST introduced a Manufacturing Execution System ("MES") which will be integrated into its operations by improving efficiency, increasing productivity and reducing human error.

MCRC's investment in a new Acid Regeneration Plant ("ARP") and the revamping of its Continuous Pickling Line ("CPL") are in progress. The investment in the state-of-the-art pickling and acid recovery technology, aims to improve the overall conversion cost, expand into new market segments, and reduce environmental impact through a close loop acid-recycling system. 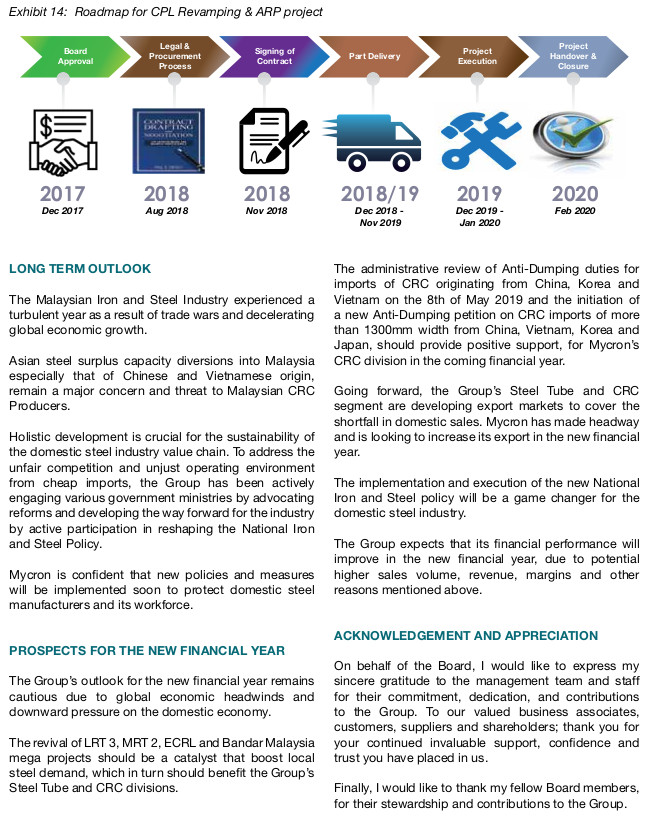