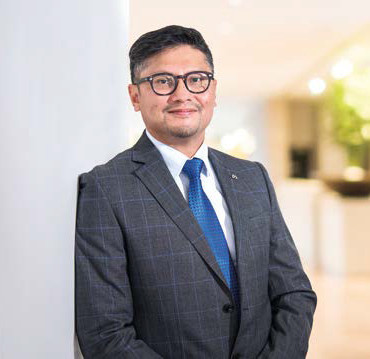 En Shazal Yusuf bin Mohamed Zain was appointed to the Board of Directors of the Company on 2 January 2015 as an Independent Non-Executive Director. En Shazal is the Chairman of the Risk & Sustainability Committee and a Member of the Audit & Governance Committee of the Company. He currently sits on the Boards of Melewar Industrial Group Berhad and several other private limited companies.

En Shazal holds a Master of Science in Shipping, Trade and Finance from City University Business School, United Kingdom. He also holds a Bachelor of Arts in Economics from Nottingham University, United Kingdom.

En Shazal commenced his working career in 1994 as a Corporate Finance Executive at Commerce International Merchant Bankers Berhad (“CIMB”). He moved in 1996 to BSN Merchant Bankers as Assistant Manager, Corporate Banking before rejoining CIMB in 1998 as Senior Strategist, Treasury & Risk Management until 1999, when he decided to leave the investment banking sector to manage various business interests. He is currently the Managing Director of Confoil (Malaysia) Sdn Bhd and Shaz Inflight Sdn Bhd.

En Shazal has no family ties with any of the Directors and/or major shareholders of the Company nor any shareholding in the Company.

En Shazal does not have any personal interest in any business arrangements involving the Company.

En Shazal does not have any conflict of interest with the Company and he has had no convictions for any offences within the past five (5) years, other than traffic offences, if any, and no public sanction or penalty imposed by the relevant regulatory bodies during the financial year.